First Day in the Studio! 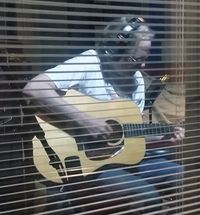 Phil and I sat  on separate sides of a glass door so that the sounds of the guitars would be recorded on different tracks. That makes it easier to balance the guitar sounds later.

We got a lot done and took a few breaks to hang out together and talk about music and mutual friends.

Here are two short videos of Chris at his desk and Phil and I warming up.